Those who restrict themselves to LARP/Training Swords do themselves a great injustice. There's no feeling better (that doesn't involve a person of the opposite sex) than bringing down your LARP Warhammer on someone. There's a satisfying "whump" just as the hammer gets squishy and harmless, and a wonderful feeling of victory in your bones. Try one of these for a new experience. These are perfect for LARP (duh) or simply for training and all-around party fighting fun. 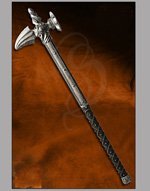 The footman's warhammer was a revolutionary concept in the human hobby of killing other humans. On one side was a large, flanged or scalloped metal head. On the other was a large, sharp hook. Depending on your mood, you could either crush someone's skull with the head, or split open their chest with the spike. You might say it was one of the first truly interactive hammers.

If a standard 20th century hammer can pound a nail into hardwood or smash concrete into little bits, imagine what it would do to your face. Now, add a longer handle to your hammer, balance the head so that it creates as much momentum as possible when swung, and split the head into flanges for better penetration. And there you have it, ladies and gentlemen; The hammer that gave nightmares (knightmares?) to armored soldiers across Europe.

This particular hammer is a mix of several styles of hammers, with a little bit of fantasy thrown in, but is still fairly faithful to the general concept of the warhammer. It was a devastatingly effective hammer against knights and other prey that wore heavy armor. Although the hammer often penetrated this armor, penetration was not necessary to get the job done (coincidentally this was something my father once warned me about, although he wasn't talking about war hammers and armored knights). The crushing blows delivered by these hammers could deal an insane amount of damage to warriors without actually breaking through their armor. They were particularly lethal against the flat-topped, cylindrical great helms worn by knights in the 12th century. The wide, flat tops were the perfect targets for war hammer strikes when a knight was taken off his horse -- especially since a good hit there would almost certainly cause death. This was one of the primary reasons for the phasing out of the cylindrical great helm (a.k.a. bucket helm).

Shorter varieties of war hammers were used primarily by horsemen or footmen in tourneys. Long-handled varieties were used by infantry against mounted opponents. One such long handled variety was the Bec de Corbin, which is considered a pole arm hammer, and was basically just a war hammer on a long, steel-reinforced handle.