The Empire series are Stylish, durable and safe, these products are the perfect choice for everyone; LARP, martial arts training, sparring, or just beating the snot out of your office mate. 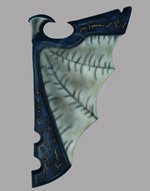 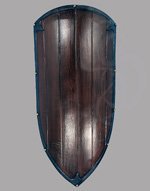 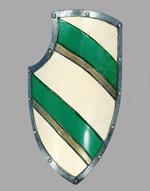 About Viking Shields Some Monks in England were walking around on their Island at Lindisfarne more than 1,000 years ago, doing monk-type things (chanting and slamming books into their foreheads, I believe) when some strange ships were spotted in the distance.

What made the Vikings so formidable? Well, their lightning fast ships were one. Their superior fighting skills and masterfully crafted swords, daggers and armor were another. But it was the shields of the Vikings that truly symbolized their people. Whether the shields were hung on the rails of their longships or thrust forward in battle, they were always present and arguably the most important part of a Viking's war gear.

Viking shields were often painted with topically important symbols or designs, and though this looked quite cool, aesthetics wasn't the primary purpose of the designs. You see, wood, as any beaver knows, has grain. And if you've ever split wood, you know that it's a heck of a lot easier to split with the grain. Well, it seems the enemies of the Vikings' had done a fair amount of wood splitting. They would strike the shield with the grain, making it much easier to turn said shield into firewood. Although the Vikings appreciated firewood more than most, they preferred to take it from the homes of their enemies, not from the tattered remains of their shields. So, they painted the shields to disguise this grain.