(or, A Whole New Meaning to the Term "Powdered Wig" (hehe, cause, hee hee, you know, people wore those powdered wigs ... and they were firing powder guns and .. hehe.. you know.. heh... uh, nevermind.) The flintlock pistol was the greatest advance in pirating since the wooden leg. Developed in the 1600s, these pistols revolutionized ship-to-ship combat (and on-land raiding), and later became a primary means of dueling. The flintlock concept was fairly simple: gunpowder was stuffed into the barrel. A lead ball, usually wrapped in some sort of fabric, was stuffed in. A metal rod (normally embedded in the bottom of the gun's barrel) was removed and used to jam the ball and powder as far back as possible, and as close as possible. A hammer (sometimes called a cock [insert giggles here]) was then pulled back half-way and left that way until the gun was ready to fire. The pistol technically was not meant to fire in this position, although sometimes they were known to go off half-cocked (and yes, that is the origin of that expression). When the gun was ready to be fired, the hammer (or cock, hehehehe) was pulled back all the way and the trigger was squeezed. At the top of the hammer, a piece of flint was held in place by a vice. When the trigger was squeezed, the hammer was released and the flint struck a metal plate known as a frizzen. A spark would be created, which would light the powder in the barrel, which in turn would make a satisfying "boom" sound. A by-product of this "boom" was the ejection of the lead ball from the barrel at a high rate of speed. Flintlock owners had to be careful that the barrel was not facing anyone when they created their "boom" sound or injury or death could result (yes, that's sarcasm).

Blunderbuss barrels are much wider than standard gun barrels. These types of barrels were designed this way for two reasons; First, the wider mouth made it easier to load the gun in a hurry (try loading a standard flintlock in a hurry -- perhaps with a screaming ensign from the Royal Navy charging you with saber drawn - and you'd no doubt start longing for a little wide-mouth love from your firearm). Second, the wider barrel allowed multiple projectiles to be shot from the gun, thereby increasing your threat radius. A gun firing several lead shots or a peppering of lead could take out several opponents with one blast, which proved useful in crowd control situations, or on board a ship where many opponents would be crowded in a small area.

These types of barrels were also a good choice for stagecoach guards, who might end up defending their charges against may opponents. In such a situation, the guard might not have the time to get off more than one shot, in which case one shot that took out several attackers would, obviously, be a little more cheery than the alternative.

The killing power of the blunderbuss could be a devastating thing, but what it added in deadliness it lost in accuracy. The wider mouth tended to spray out its payload in a less-than-straight line, making for occasional and awkward Pulp Fiction-style complete misses of opponents. The gun was most effective at close range, against several opponents. At greater ranges, the gun was much less effective than its narrow-barreled cousins.

Dueling Pistols are pretty simple, really. You line up facing each other at a predetermined distance, take careful aim with a specially made pistol, and fire at your opponent, hoping your bullet hits him and causes enough damage to keep him from firing back.

Dueling was a right of the upper classes. In the 18th and 19th centuries, pistols were added to swords as methods of seeking satisfaction for wrongs. Like the swords used in duels, dueling pistols were a status symbol as well as a means to an end of your opponent. The more attractive your pistols, the more distinguished you were considered to be. This was one of the reasons that so many different styles of dueling pistol were created. Hundreds of thousands of beautifully styled and carved firearms were stored in noble houses across the world, waiting for the right insult to be levied against the owner or his associates.

Here are a few examples of replica firearms sold by Strongblade. Please visit our Replica Firearms page to see a more complete list. 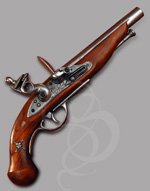 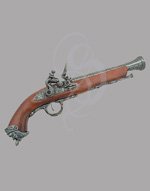 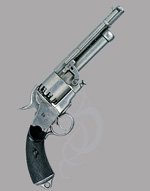