From the Vikings to Gimli the Dwarf, battle axes, maces and hammers add a touch of the savage warrior to anyone. Great as a primary piece of equipment, just as good as an accent, strapped to the back or dangling from your belt. 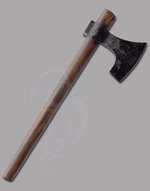 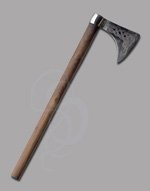 Hand and a Half Axe with Dragon Etching 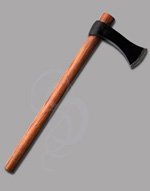 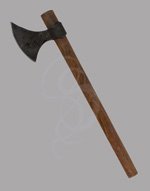 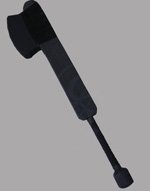 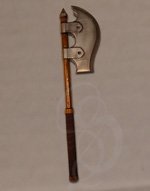 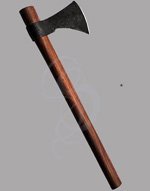 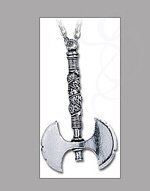 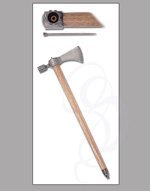 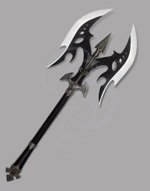 The fiercest of the Black Legion were the Barumen Axemen of Lokonia. These were the main vanguard of The Dark One's army, made up of the largest and most ferocious of Barumen soldiers. They were heavily armored in plate steel and leather and each wielded two great Battle Axes which they used with deadly skill. The Battle Axe was one of the few weapons forged by the Dark Elves in mass, each one being shaped nearly the same. Every Axeman carried two identical battle axes, with hooked and curved blades, leather grips and skull crushing pommels. The Black Legion Battle Axe could be used to chop like a traditional axe but could also be used to hook and pull an enemy. The Battle Axe could be thrown with deadly precision, and its twin points were devastating. The mere sight of this weapon caused many to retreat in battle rather than face its terrible edge.