You don't absolutely need a shield in combat, but then again, you probably don't need your liver either. Or your arm. Or half of your intestine. Do yourself and your liver a favor. Buy one of these shields. 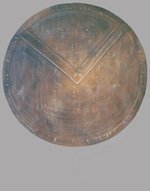