Battle Swords and Their History

Including Two-Handed Swords, Claymores, Bastard Swords, and the Infamous and Terrifying Toothpicks of Hellacious Doom 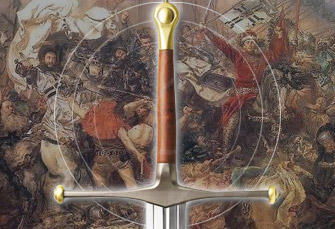 These swords can be sub-categorized into hand-and-a-half swords/bastard swords and two handed swords. Swords of this nature would have been a Knight's primary weapon on the battle field because of their strength, reach, and armor-splitting weight.

These weapons were intended to smash and slice through thick armor, so had to be quite heavy and sharp. While the point of the sword could be used to pierce (and the final killing blow with these swords often was a thrust), this was primarily a slashing weapon. AS time went on, Swords moved more to a thrusting style: The European "tuck" was little more than a dull metal blade with a horrendously sharp point. Perfect for finding those hard-to-reach crannies in armor (or for picking up loose trash after the battle). But thrusting swords like the tuck, though used in large battles, still aren't what we consider "battle swords." battle swords, to us (and to any real man) are huge, slashing weapons..

Because of the formidable length of battle swords, many feature a riccatta - a dull section of the blade just below the hilt. The swordsman could place a hand on this riccatta allowing him to grip the blade a little higher, which gave the swordsman more leverage for the swing (a bit like hoking up on a modern baseball bat). This was especially useful for in-fighting (fighting at close quarters), or for more precise thrusts. One of the more popular melee techniques with these weapons was to use both hands to thrust the blade into an opponents visor, or into gaps in their armor.

Battle swords were used extensively across Europe and, in a different style altogether, across Asia. They took many forms, from the savage claymores of the Scottish to the two handed infantry swords of the English.

The hand-and-a-half swords, which some people don't classify as war swords, were unique because they could be wielded with one or two hands (thus the endearing "bastard sword" moniker). Many of these swords feature what's known as a "waisted-hilt." This is a hilt that tapers from the pommel downward, bulges at the center of the hilt, then tapers again to the hilt. This creates two separate areas for hand placement, an upper and a lower. The central bulge also provides traction for one handed use.

The war swords were tricky to carry. Knights would strap them to their horses usually, or had their squires carry them when not in use. They rarely had sheathes.

Here is are a few examples of battle swords sold by Strongblade. Please visit our Longswords and Two Handed War Swords page to see a more complete list. 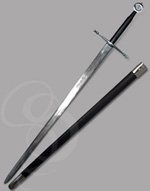 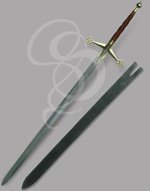 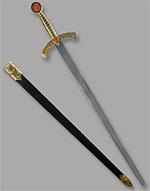