The History of Curved Swords 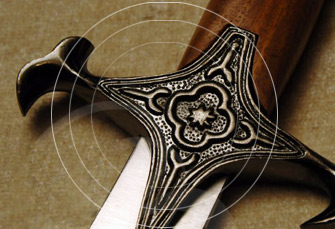 Since then, a number of curved swords began appearing in the East and westerners took to calling such curved swords "Scimitars". Technically, there isn't one sword that is called a scimitar; the term refers to the entire group of curved swords that came from East (excluding the Japanese curved swords). The term may be a derivative of Shamshir which was a thin curved sword from Persia, although the shamshir wasn't really popularized until the 1500s. Other scimitars include the kilij(think of the massive cleaver swords from Aladin and you have a fairly accurate picture), and the Indian Tulwar (somewhere between a >shamshir and a kilij). Some smaller curved weapons from the east include the Kopis (a knifelike curved blade that probably was the predecessor of the Khopesh), the Nepalese kukri and the hook-handled falcata of ancient Spain. Fantasy has had it's share of Scimitars. Most notably, perhaps, is the Dark Elf Drizzt Do'Urden, of the Forgotten Realms book series by R.A. Salvatore. Drizzt used two flashy scimitars when he fought, one in each hand, filleting his foes whenever he drew them. More recently, the Lord of the Rings movies show many of the elven characters weilding swords similar to scimitars.

Curved swords weren't confined to the east (or to fantasy), of course. As the scimitars developed in the east, the west was catching on to the trend. Sabers and cutlasseswere slowly conceptualized and developed in Europe. The curved blades were ideal for charging horsemen who tended to lose their straight blades in the bodies of their haplessly impaled foes. The curved sabers could slash opponents and slide off as the horsemen rode by. Another advantage was that curved blades were more compact than straight ones, so horsemen were also able to slash from side to side without worrying about trimming the ears off their horses.

Sailors also liked this compact size, since ship-board combat was often in very close quarters, with a vexing amount of wooden obstacles for swords to get embedded in. This explains the stereotypical image of the pirate holding a cutlass, reinforced by Johnny Depp, Orlando Bloom and Kierra Knightley in the movie Pirates of the Caribbean.

Here are a few examples of arming swords sold by Strongblade. Please visit our Arming Sword page to see a more complete list.