For years, only the bad guys had these, but they're slowly becoming fashionable for heroes these days. Could be the exotic nature of them. Could be the dangerous looking curve. Or it could just be the wide-sweeping upsizing factors of globalization on ent 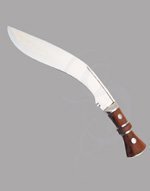 The Dundarei saber is a fully-tempered and battle read.he swept forward blade allows for powerful strokes. And the graceful fullers carved on the forte of the blade makes you look good while making those strokes.

Made to simulate the ease of a sword with the damage of a battle axe, the Falchion was introduced sometime in the 11th century in Europe. Variations abound, their use carried on for centuries more, demonstrating their versatility, distinct appearance, and ability to deliver crushing blows. Father to the Persian and modern scimitar as well as the saber seen on battlefields abroad, Falchions have long blades with a straight back on one side of the blade and a longer curved style on the other side, putting additional weight towards the tip and the curve to increase striking force. The curved side was primarily used for striking while the back edge of the blade can be used to deliver blunt blows.