Just when pirates couldn't get any cooler, Johnny Depp goes and immortalizes Captain Jack Sparrow in Pirates of the Carribean. Sure, some of these aren't your typical pirate swords, but all fit the pirate mold quite well. Arrrr. 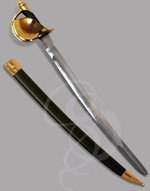 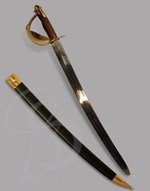 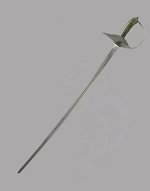 The Brigantine was a powerful type of ship that was highly sought after by pirates. It was a roughly 150 ton ship, capable of carrying from 10-12 guns and a crew of up to 100 men. These ships were for big-boy pirates who didn't have to hide or run from their enemies. Sometimes called "skirmish ships," the Brigantines were made for combat, and it was a brave or powerful pirate who commanded one. Brigantines were also occasionally used by the Royal Navy to hunt down pirates, but for the most part, pirate hunting ships usually were a little larger still. Regardless, the larger Brigantines could gobble up the more common sloops like hor doeuvres (mental note: never use the word hor doeuvres in writing again. Pain in the butt getting the spelling and just doesn't look right). Although the sloops were a bit faster and occasionally carried more guns, the Brigantines could take much more punishment and could hold more men.

The average pirate ship, a sloop, was a one-masted ship that could carry about 50-75 men and as many as (but rarely) 14 guns. Some sloops were larger than that, but in almost all versions, a Brigantine was a more favorable ship. In the pecking order of ships, Brigantine's were above Sloops and Barqs, but below the mighty Frigates. Few pirates captained Brigantines. Even fewer ever captained Frigates. Blackbeard had one (the Queen Anne's Revenge), but few others had the means to take and keep a warship.

The Brigantines carried two sails, but used a combination of square sails and "fore-and-aft" sales to give it versatility on the sea (which means that it could both outrun you AND outgun you). Of course, shipping vernacular changed and morphed throughout history, and the exact specifics of the Brigantine mutated with it, but all seem to agree that brigantines had two masts and were larger ships than Sloops.

Pirates
Romanticized and vilified in literature and film, pirates have been the subject of endless fascination. Pirates of course, are any group of sailors who prey upon other ships, stealing money or goods and sometimes harming or killing the crew. Eye patches seem to have something to do with piracy as well, but no one can really figure out what.

It's hard to say when pirating first started. There are reports of pirates as far back as ancient Greece, and possibly even before, but the pirates that most people think of are the ones from the 17th through the 19th centuries. This was a time when governments actually sanctioned piracy against their enemies (apparently, it was okay to steal from and murder people as long as they were considered enemies of your country). Under these government laws, anyone could attack ships belonging to an enemy country and keep anything that they could recover from the ships. Crews that took advantage of these laws were called "Privateers," which was French for "mean guys with parrots," or "men who drink rum." Well, okay. Privateer isn't really French at all. But "souffle" is, and it means a "light fluffy dish of egg yolks and stiffly beaten egg whites mixed with cheese or fish or fruit."

Many countries encouraged privateers, including England, Spain, America, France, and many North African countries (these African countries formed the heart of the infamous Barbary Coast pirates). And while the idea of privateers might have sounded good when it was first thought up, it lost some of its charm later on. Here's why: The privateers theorized that, "Hey, if I can get 100 gold a month attacking enemy ships, I could probably get 400 a month attacking any ship." They began testing that hypothesis and, soon, there were hundreds (thousands even) of former privateers attacking any ship that came near them. Other privateers switched to piracy when their nations stopped allowing privateering. Thus began the Golden Age of Piracy.

Pirates may have been a lot of things, but they were rarely inefficient. Ship-based life called for cleanliness, order and efficiency in all things. Which is why the cutlass was a favorite of the yo-ho-ho crowd. The weapon was both sword and shield: a vicious blade at one end, a dazzling basket hilt on the other. The blade was short enough to be swung recklessly (without fear of getting caught in rigging or masts) and wide enough to do real damage when it hit. The baskethilt provided excellent hand protection and could even be used as a small shield. The curved blade allowed for fast, efficient cutting and looked pretty good, too.

Since then, a number of curved swords began appearing in the East and westerners took to calling such curved swords "Scimitars". Technically, there isn't one sword that is called a scimitar; the term refers to the entire group of curved swords that came from East (excluding the Japanese curved swords). The term may be a derivative of "Shamshir" which was a thin curved sword from Persia, although the shamshir wasn't really popularized until the 1500s. Other scimitars include the Turkish kilij (think of the massive cleaver swords from Aladdin and you have a fairly accurate picture), and the Indian Tulwar (somewhere between a shamshir and a kilij). Some smaller curved weapons from the east include the Kopis (a knifelike curved blade that probably was the predecessor of the Khopesh), the Nepalese kukri and the hook-handled falcata of ancient Spain.

Sailors also liked this compact size, since ship-board combat was often in very close quarters, with a vexing amount of wooden obstacles for swords to get embedded in. This explains the stereotypical image of the pirate holding a cutlass, reinforced by Johnny Depp, Orlando Bloom and Kierra Knightley in the movie Pirates of the Caribbean.