The Scots, Irish and Celts were always bristling with swords. Whether it was the devastating two-handed claymore of the Scots, the massiv Irish two-handers, or the stylish celtic arming blades they were always prepared for a scrap. Here's a sampling of their swords. 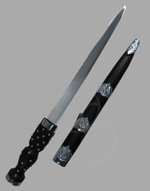 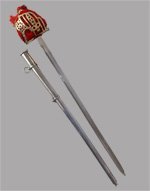 There are several popular heroes in Irish legend. Next to Cu'Chullain, the next most popular hero is probably Fergus mac Róich, who is probably the same person as Fergus mac Lóti, who has absolutely no relationship to Dylan Fergus, the obscure young actor who played "Band Guy #1" in the equally obscure television series "What I Like About You"

Although Fergus mac Róich and Fergus mac Lóti are spoken of as two different heroes, most scholars now seem to agree that the two are actually one hero with two different names. As mac Lóti, Fergus had his face beaten in when he encountered a sea dragon named Sinach. He wasn't aware of the hideous damage that Sinach reaped on his face at first, and the people of his village did all they could to hide it from him. They hid all of the mirrors in town and pretended that nothing was wrong (when Fergus said, "My face feels funny," to his friend Clandahl, his friend is quoted as replying "Hey, how bout we go hiking this afternoon?"). Fergus eventually learned about his disfigurement, and, in a fit of rage, made his way back to Sinach and, after an epic battle, slew the sea dragon with his mighty sword Caladbolg.

As mac Róich, Fergus was a king of Ulster who was betrayed by a princess and lost his kingship to a 7-year-old. Not the stuff ordinary hero tales are made of. On the bright side though (and I am absolutely not kidding when I say this) mac Róich's claim to fame was his mighty sword Caladbolg, which could shear the tops off of hills, and his enormous ... uh ... well... his enormous OTHER sword. That's right. mac Róich was known for his rather large phallus. And you'd better have a large phallus when you marry a deer goddess, as Fergus did. "Hung like a deer god," was the common description of Fergus. Fergus also had a notable role in The Great Cattle Raid of Cooley, a Trojan-war type of conflict fought over a large brown bull. And again, I made none of that up. Please look it up if you don't believe me. I probably wouldn't believe it either is I hadn't read the Cycle of Ulster myself.

When Strongblade refers to a "Battle Sword", we are referring to most European medieval swords with blades longer than 38inches or so. These swords can be sub-categorized into hand-and-a-half swords/bastard swords and two handed swords. Swords of this nature would have been a Knightós primary sword on the battle field because of their strength, reach, and armor-splitting weight.

These swords were intended to smash and slice through thick armor, so had to be quite heavy and sharp. While the point of the sword could be used to pierce (and the final killing blow with these swords often was a thrust), this was primarily a slashing sword.

Many of these swords feature a riccatta ó a dull section of the blade just below the hilt. The swordsman could place a hand on this riccatta allowing him to grip the blade a little higher, which gave the swordsman more leverage for the swing (a bit like choking up on a modern baseball bat). This was especially useful for in-fighting (fighting at close quarters), or for more precise thrusts. One of the more popular techniques with these swords was to use both hands to thrust the blade into an opponentós visor, or into gaps in their armor.