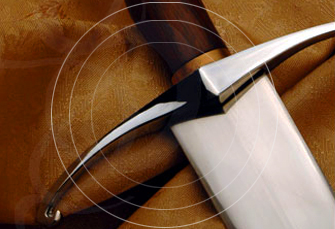 There's a popular saying in the sword industry: "Don't put your tongue on the polishing wheel."

Um. And there's another popular saying in the sword industry that might just be a little more relevant than that one: "A sword is not an axe."

A sword is not an axe. Unless it's this sword.

Okay, maybe that's not really saying, but it should be. Because swords really aren't axes. If you want to cut down saplings or thorns bushes, then you probably don't want to buy a battle-ready sword. You want an axe. And as I hope I've established here, a sword is not an axe. Unless you name your sword "Axe," in which case you have found a loophole. But you still shouldn't use it to cut down brush.

I hear the questions all the way from my computer desk as I write this, which is odd because I's writing this in your past, and you probably live really far away from me. Your question: "But why *cant* I use a sword to cut down saplings? It's battle-ready, right? That means it's really, really tough." And I give you my best Yoda nod, and say, "Much to learn, you have, young Jedi. Much to learn."

Strongblade sells battle ready swords. But what does that really mean? And what's the difference between a battle-ready sword and a stage combat sword? In this two-part article, I will answer both those questions. And I will also tell you how the crop circles in England came to be there. But, in this first part, I will focus on battle-ready swords.

There really is no industry-standard definition of "battle-ready." It's one of those terms that people throw around, like, "special forces," or "best-seller," or "licensed practitioner of medicine." What a joke. I mean, I perform surgeries all the time and I have no medical degree whatsoever. You see what I mean? The terms sort of mean something, but there is no exact specifications for it. There are some pretty solidly established minimums for battle-ready swords, and that's probably the best place to start.

Yoda hopes he doesn't have to repeat his lesson.

Construction
I think everyone agrees that a sword should be made from carbon steel. Especially this guy. And not just a little carbon. A good sword should be made from high-carbon steel. Stainless steel swords look nice, and they're usually pretty inexpensive, but as that guy in the link found out, they shatter easily. Carbon steel wont shatter. This is why Cowan's dad didn't talk about "The Riddle of Stainless Steel." It was just the "Riddle of Steel." Learned your lesson now, you have? asks Yoda. Yeah, Yoda. Just because.

Why would you want a sword to be brittle anywhere? Well, perhaps brittle is the wrong word. You want the sword to be more rigid on the outside–harder and less flexible. Why is this? Because you want that sword to hold a nice edge. And to hold a nice edge, you need a really hard metal. The problem with hard metal is that it breaks more easily. Sounds weird, doesn't it? Well, there's a cool concept from the Chinese philosophy, Taoism, that explains this. The Taoists know that an oak tree is stronger and more rigid than a blade of grass. But when a powerful storm hits, it is this rigidity that makes the tree snap in the wind. A blade of grass is flexible enough to wave and flow with the storm, and it does not break. Or, as Yoda likes to say, "Upon a polishing wheel your tongue should never rest." Yoda knows nothing of Taosim.

Tang. Not even remotely what were talking about.

Tang
To be a strong, battle-ready sword, the high-carbon steel should be quenched in a barrel of Tang®. Apparently this powdered orange drink used by astronauts has a certain chemical in it that gives the steel . . . um . . . okay. I's reading my notes now. What I said is incorrect. *Waves hand in Jedi fashion* These are not the tangs you're looking for.

The tang is actually the narrow part of the sword that you attach the grip to. There are a lot of different types of tangs, but the strongest style is the full tang. This means that the blade and the tang are made from one piece of steel. Some sword blades have the tangs welded onto them. Which is like using blades of grass as the foundation to your house. (Yeah, I's reeeeeeeally stretching that grass metaphor). Welded tangs have a tendency to snap off, and all you can do is keep pretending you still have a sword blade, and complimenting your opponent on his skillful ability to avoid being hit.

Balance
Balance is really a subjective thing. Some people like a more forward weight, so their strikes have more power. Some prefer a more rear balance, so the blade isn't so top-heavy. And others swear that the center of balance should be a few inches north of the guard (north being toward the tip). A sword may not be balanced to your liking, but it could still be a fine battle-ready weapon.

A battle-ready weapon, although it is finely crafted using the best materials and forging techniques, should not be smashed against things, or used to chop down saplings. You would no more use a battle-ready sword to cut brush than you would use an F1 car on your road trip to Florida. Fine swords are meant to be used in battle by skilled swordsmen, who know the strengths and limitations of their weapons. I cringe every time I see a movie with sword fighting in it. Usually because the script sucks. But the other common reason for my cringing is the fact that the combatants are using their swords to block their opponent's blade. Sword fighter in the Middle Ages rarely used their swords like this. Their weapons were too big an investment to use as a shield. Interestingly, they actually *had* shields. And why did they have shields? So they wouldn't have to stop a hurtling piece of 3lb metal with one of their most expensive pieces of equipment—their swords. When two swords meet, bad things usually happen. Even though Hollywood would have us believe otherwise..

And there lies the fundamental difference between battle-ready swords and stage-combat swords. The latter are meant to take sword on sword abuse, and are typically used by actors rather than trained swords fighters. So check back soon to see the second part of this article, about stage-combat weapons. And crops circles.

Read part two of this article on Stage Combat swords.

Here is are a few examples of battle ready swords sold by Strongblade. Please visit our Battle Ready Sword page to see a more complete list. 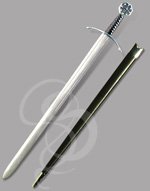 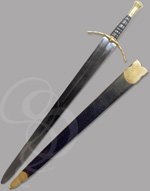 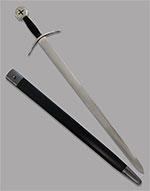 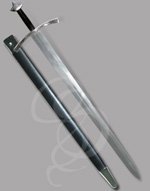