Why do swords get all the glory?

Swords get most of the glamor in the pre-modern world of warfare. They're flashy, elegant, and loaded with symbolism. When you think of a knight or a soldier of the middle ages, I bet you think of them with a sword. But when it comes to raw, lethal power, there is nothing quite like an axe.

Just to belabor my point on the sword bias in history:

Name three in history or fantasy that had names. Go on. I'll wait quietly.

Just to belabor my point on the sword bias in history:

Name three axes in history or fantasy that had names. Go on. I'll wait quietly.

I may have gotten carried away there.

Never has metaphor and image come together so disturbingly.

The point is not that swords are overly glorified (God, but do I love swords), but that axes are underly glorified. They are the NFL offensive linemen of the weapons world. They are the Honda Civics of combat. Not flashy, but brutally efficient and reliable.

Axes may well have been humanity's first real weapons. Museums in Europe are overflowing with flint axeheads crafted by Neolithic warriors. The first axes in recorded history (that I am aware of) were labrys. I spent ten minutes looking for labrys in a book on female anatomy before I realized it was an ancient battle axe. And that battle axe was not happy when I asked her to show me her labrys. Wait. I'm drowning in a spiral of innuendo.

The labrys was the great double-bladed axe of the Minoan civilizations (The Minoans were from Crete and the Aegean Islands, in case that D you got in ninth grade history is coming back to bite you). They had lovely double-bladed axes, mostly for ceremonial purposes. And enjoy that mental-axe-image, because there really were no other double-bladed battle axes in history.

I know you didn't read it again, so I'll write it again.

There really were no other double-bladed battle axes in history.

Despite the prevalence of those types of axes in fantasy entertainment, they were incredibly rare in European history, and not very common outside of Europe, either.

Think about it. You're a warrior. Running around fighting people. Sometimes running at them. Sometimes running away. But you're always running. So why would you want to carry a ridiculously heavy piece of steel that had *THE SAME WEAPON ON BOTH SIDES?* It's not like you're going to get bored of the side you are hitting with and switch. Why not put a spike on the other side? That way you can punch through armor with one end, and crush mail or sever limbs with the other. And, really, steel was not cheap, so using it to clone your axe blade was not the best use of resources.

Moving on from the Minoans. The Romans used axes, but mostly as tools to cut down trees and such. The next big development for axes in battle really didn't come until the 6th century or so, when the Merovingians perfected the Franciscan axe. These axes were fairly thin, with a high arch leading to a slightly curved head. Great for your run-of-the-mill dismemberings, but even better when hurled. Ironically, these axes gained fame during Charlamagne's reign, even though it was his sword (and that of Roland) that survives in our historical knowledge base.

Vikings were all about power. And beards. And beard power. This is a Viking-Franciscan design.

I don't suppose it's possible to write an essay about axes without talking about the Vikings. They had a reputation for axes, and a well-earned one. The Dane axe—most popular in the 10th and 11th centuries—had many variations. The most common version was a light, thin blade with a wicked edge and a forward sweep that allowed for extra killin' power. These were sometimes mounted on short hafts (perfect for boat raids on unsuspecting monks) or on long poles (perfect for on-foot raids against unsuspecting monks).

The Vikings also perfected the bearded axe—a technique for disguising their axe as a person so that unsuspecting monks wouldn't know they were being attacked until the last moment.

No. That's not actually true.

The monks probably never knew they were being attacked because they died instantly.

Yeah, okay, the disguise thing isn't true either. A bearded axe is actually an axe blade with a long heel that hangs down. This bit of blade gives the wielder a greater cutting surface, but, more importantly, it provides a great hook. Why would you need a hook? Well, the Vikings (and the Saxons, really) fought in shield walls—long lines of men, shoulder to shoulder, holding shields. Trying to get through a shield wall was ridiculously hard. So, Vikings came up with the bearded axe. You strike with your axe *over* the opponent's shield. Catch the inside rim of the shield with your axe. Pull hard. Suddenly, the shield dips and you opponent's surprised face is pounded by your friend's axe. Tada.

I'm not really going to talk about polearms in this post—that's a whole nother post in itself. But I would be remiss if I didn't talk about the pollaxe. It's one of the most lethal battle tools ever created, and it's possible that it took as many lives as all other axes put together. The pollaxe (or polaxe, or poleaxe, or oh-dear-god-don't-hit-me-with-that) became popular in the 14th and 15th centuries, during the golden age of plate mail. Armor became so strong during this time that it became really, really difficult to actually kill anyone (well, anyone of importance, right?). And what fun was that? So the polaxe was created. A long shaft, crowned with a steel head (stop it, pervert) that featured an axe-blade on one side and a spike or hammer-head on the other. And usually with another spike at the top, just to make it lethal from any angle.

Fierce in battle, the poleaxe was also the peasant answer to the pole tax.

These axes could be swung with enormous power, and regardless of what side you used to strike with, death or grievous injury was usually the result. The spike could punch through armor like a hot knife through something really flimsy like paper or wet drywall or lingerie. The blade could crush armor and cut through the mail, flesh and bone beneath. This was the tool of choice among medieval infantrymen, and it was devastating.

In the high Middle Ages, swords in battle were relatively rare. It was the axe and the bow that typically won the day. And yet the knight with the sword is the most resounding image of that period. That axe lobby needs a better PR firm.

Here is are a few examples of axes sold by Strongblade. Please visit our axe page to see a more complete list. 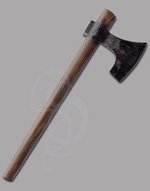 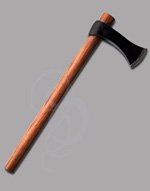 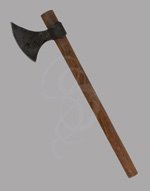