Perhaps the only truly perfect combat instrument ever created; A seamless extension of your arm with no moving parts and little maintenance needed. It served us well for thousands of years and swords have never misfired or ran out of ammunition. 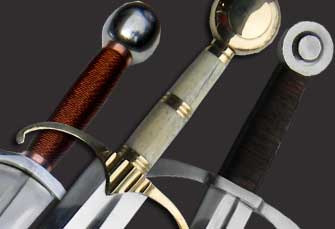 The choice of medieval knights. Typically they were wielded in one hand while a shield was held in the other hand.

Full tang and tempered these are the real deal

These are our largest we offer, often requiring two hands to wield.

These are not historical replicas but they are still pretty cool.

These are used with one or two hands.

Katanas, samurai and other Asian blades.

Made of foam or latex and used for Live Action Role Play(LARP) or for just having fun.

An elegant weapon from a more civilized time.

These are the classical blades of medieval Europe.

Pirate, cutlasses and other curved blades.

The most sleek and civilized of all blades.

Whether you're standing shoulder to shoulder on the beaches of Troy or facing down a Thracian gladiator in Rome, these are the weapons you would have used.

Gaelic including Scottish and Irish.

These were especially effective for in close fighting.

With blunted tips and thicker edges these are better suited for theatrical re-enactment and stage fighting.

Save us from the fury of the Northmen.

So, you've been watching reruns of the HBO Series "Rome," and want to learn a little more about the hardware they're using? Well, look no more, weary web wanderer, for here before you is the history of the Gladius.

The Roman Gladius has a long and prosperous history. It was, at first, a weapon used by the Spaniards. The Spaniards were particularly good at at fighting the Romans and earned the grudging respect of the Italian conquerers, who, nonetheless conquered them anyway. (it's a fitting tribute to the toughness of the Spaniards that Russel Crowe's "Maximus" character in the movie "Gladiator" was a Spaniard who had been integrated into the Roman army). The Spaniard's had two weapons feared by the romans: The hook-handled "falcata," (a horrific slashing weapon with a lethal forward cuve) and the Gladius. The Romans were so impressed with the effectiveness of the gladius that they quickly adopted it for their own troops.

We have have dont thousands of engravings and it never ceases to amaze us how much it can add to the attraveness of an item. Our online App allows you to create a design with text, pre-designed graphic patterns or choose from our library of over 1,000 artwork images. We can engrave family crests, coat of arms, military insignia, corporate logos, organization emblems and just about any other form of graphic that can be represented as line art. Our online App can handle most designs but, if you have a design beyond what can be done by our App, please contact us, we are happy to discuss your project with you. Our Engraving Gallery shows samples of some of our engravings we have done in the past. We have also listed a few engraving samples below.

WE CELEBRATE OUR ARMED FORCES