or, When Men Wear Skirts, They Need Big Swords 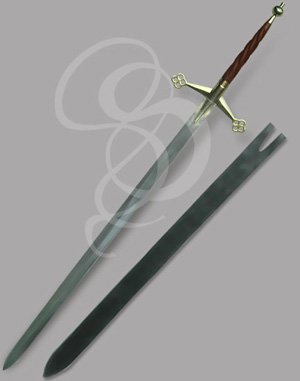 There weren't a lot of them, but pound for pound, Scots were one of the most ferocious group of warriors in the world. Even without heavy armor or a lot of horses, these legendary fighting men took huge swaths of land away from the English, and could have continued to take land if not for internal strife and politics.

By now we've all heard of the famous warlord William Wallace, who led one of the greatest Scottish advances in history. Wallace was responsible for some of the greatest Scottish victories against the English, including the famous battle of Stirling Bridge. This battle cemented the Scots' reputation as fierce and unpredictable (although many of the english felt this battle proved that the Scots had no honor. The Scots retort that the english are sore losers).

The battle took place in Stirling, near and on the Forth River. The English, who for centuries practiced the art of mass suicide by forming neat little lines and marching honorably toward their enemies, began crossing the Stirling bridge in their usual fashion. They marched across in neat lines, with troops spreading back into formation as they crossed. It was expected of honorable enemies that they wait for the opposing army to set up before engaging in combat, and the English fully expected this from the Scots. Wallace made it seem as if they were doing just that, waiting until the English army was split on both sides of the bridge before finally giving the signal to attack.

The Scots overwhelmed the English troops that had made it across. In the meantime, a squad of Scots forded the Forth at a shallow spot down river and flanked the English. When the English army, in full route now, retreated (many swimming across the river or crossing in shallower spots) the Scots were waiting for them and finished them off on the opposite bank. It was a slaughter, and a decisive victory for Wallace.

Swords of the Scots
The Scots fought with a variety of swords and daggers, but the ones they are most famous for are listed and described below:

The Scottish Claymore ( Claidheamh Mòr)
The claymore was an awesome sword on the battlefield. The amazing reach (as much as 60 inches of overall length for standard claymores)made it extremely difficult for opponents to close with the wielder. The long ricasso allowed the bearer to switch to a more close-quarters style of combat if an opponent made it inside his distance. The claymore (or more accurately, "Claidheamh-mor" in Gaelic) was first reportedly used in the 13th century, and was used as recently as the 18th century. The twisted hilt claymore was the most recent of the claymores (c. 1500) and features the downward-angled crosses that end in small honeycomb patterns. The twisted wooden hilt was a better way to grip the sword (and the fact that it looks so damn cool probably had something to do with its broad acceptance among highlanders). Legend has it that a claymore was hurled into the field of battle, toward an opposing army before combat, to signify that the Scottish troops were ready to fight. No real evidence of this, but it’s cool and fits the highlander idiom, so we thought we’d pass it along.

The Scottish Baskethilt Claymore (Swordh a' Kick-Buttus (that may not be entirely accurate))
Scottish baskethilts are often referred to as "Claymores," which is a little confusing since the huge two-handed swords wielded by Scots are also called Claymores. There's no real evidence to suggest which is the real Claymore, but since these swords have a secondary name (basket-hilt) and the two-hander does not, Strongblade refers to these swords as Scottish basket-hilt swords and the large two-handers as Scottish claymores. just to confuse things a little, the M18 Claymore land mines used in modern warfare have nothing whatsoever to do with this article.

The gorgeous basket-hilts on these Scottish swords had a dual purpose. The first (and most important, really) was to protect the vulnerable hands of the swordsman. Highlanders rarely (if ever) wore gauntlets, so they needed the extra armor. The large baskets also added weight to the hilts, giving the sword a much better balance.

The blades on these swords were sometimes single-edged (also known as backswords), but more often than not they were double edged and capable of both slashing and thrusting. Occasionally, curved baskethilts were seen, but very occasionally. Highlanders would often use these swords in one hand while holding their dirks in the other.

The Scottish Dirk (Biodag)
Displayed proudly (unlike the much more subtle and always hidden Sgian Dubh), the dirk was both a warning and a means of identification. The craftsmanship that went into these items was astounding, if not necessarily surprising when considering the amount of pride the Scots dressed themselves with.

Long and crossless (sometimes as long as 14 inches in length), these slim daggers were usually edged on only one side and could be wielded with great dexterity against opponents. These knives in the hands of a skilled highlander were lethal. Worn on the right side of the body, dirks were considered part of the Scotsman’s honor and would never have been used for mundane tasks like gutting fish or skinning hunting prey.