Or, How to Steal Another Country's Sword and Claim it as Your Own 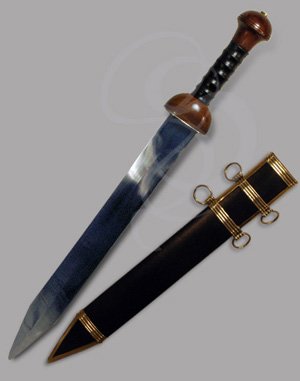 So, you've been watching reruns of the HBO Series "Rome," and want to learn a little more about the hardware they're using? Well, look no more, weary web wanderer, for here before you is the history of the Gladius.

The Roman Gladius has a long and prosperous history. It was, at first, a weapon used by the Spaniards. The Spaniards were particularly good at at fighting the Romans and earned the grudging respect of the Italian conquerers, who, nonetheless conquered them anyway. (it's a fitting tribute to the toughness of the Spaniards that Russel Crowe's "Maximus" character in the movie "Gladiator" was a Spaniard who had been integrated into the Roman army). The Spaniard's had two weapons feared by the romans: The hook-handled "falcata," (a horrific slashing weapon with a lethal forward cuve) and the Gladius. The Romans were so impressed with the effectiveness of the gladius that they quickly adopted it for their own troops.

The gladius was used primarily for stabbing, so it features a fearsome v-shaped tip, great for slipping through the spaces in ribs, or through the cartilage itself if aim was bad or mood particularly grim. The versatile sword could also be used to slash; both edges were sharpened and deadly. The weapon was ideal for the Romans, who used it in formation, with all soldiers drawing their swords from their right side with their right hand (this bit of conformity kept legionnaires from accidentally dissecting their immediate neighbors). The small swords were the perfect complement to the huge scutum shields that the soldiers used in their formations, giving the troops speed and the ability to withdraw the weapon quickly and defend themselves solely with the shield. 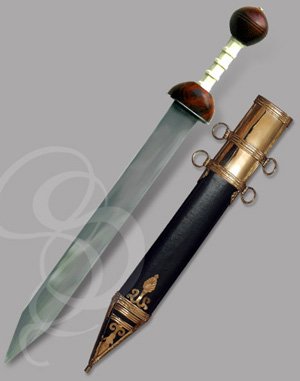 Gladiators naturally adopted a (shorter) version of the gladius as one of their primary weapons and, in a burst of wild creativity, were named after their swords. Want some more nutsy creativity? Well, then consider this: Gladius in Latin means .... sword. Are we getting too abstract for you?

The gladius is often considered one of the most important swords in history, both due to the impact it had on the Roman troops and to the advancements it represented in sword evolution. The sword itself had at least three evolutions of it's own, moving from the Gladius Hispaniensis (Spanish Gladius), to the early Roman version of the sword, to the latter version or "Pompeii" version. The Pompeii Gladius was one of the latest versions of the sword. You'll recall that Pompeii had some volcano problems in 79 B.C. and ended up bundled nicely in the ancient version of packing peanuts. Bad for them, good for archeologists, who unearthed an excellent Pompeii Gladius in the city. 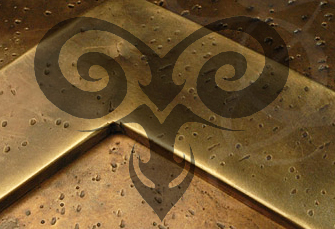