What they lack in reach, they make up in style. Short swords are convenient, fast and stylish. It's the perfect way to say "Back off, punk" in a classy, understated way. 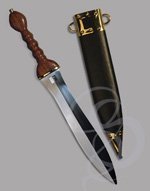 The short sword was the utilitarian sword of history. Longer and sturdier than a knife, but much easier to weild than a broadsword or battle sword. It is difficult to determine when the short sword made the transition from knife to sword, but the most well known ancient short sword is the Spanish gladius, which was used by roman legionnaires and gladiators alike. In fact, the term gladiator actually comes from gladius.

Early short swords were often carried by spearmen in armies. These warriors would use their spears to keep their enemies at bay, but when the enemy closed to melee range, the spearmen/archers would drop their primary weapon and switch to the short sword, which was surprisingly effective in close combat.

Short swords evolved in europe into smaller versions of arming and battle swords. Longbowmen carried them as their primary melee choice, although if the archers were involved in hand-to-hand fighting, it was usually a sign that your army was in trouble.

Short swords were often elegant and compact enough to be worn by nobles and warriors alike, even outside of combat.